Meal #7: Oysters with citrus vinaigrette, halibut with cabbage and soft gingerbread at Jimmy’s and Josefine’s place 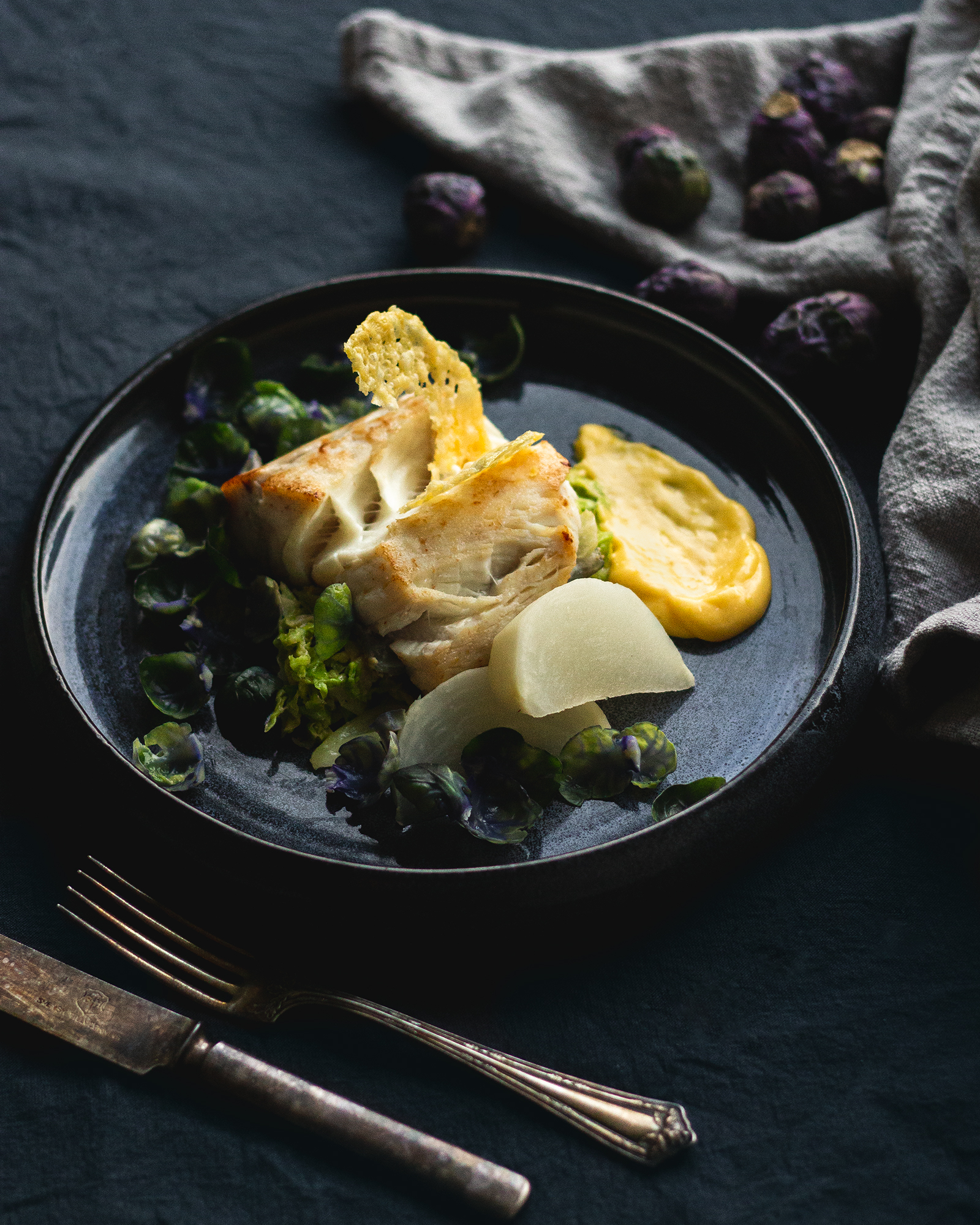 The rating of this meal is now:

Have you cooked this meal? Please rate it so that other people know what you think of it! Also leave a comment below so I can know if you liked it or not. Thanks!

Jimmy is my colleague at my “normal” day job as a structural engineer, and I decided to ask him if he would want to do an episode with me and Lina at him and his wife Josefine’s place. They happily agreed, so Friday the 7th of December we took the car to their place after work, to cook some really nice food.  Both Jimmy and Josefine love the Nobel banquet, and therefore we decided to honor this in their portrait. You can see Josefine wearing a sash and big earrings, while Jimmy is wearing a cravat.

Since Jimmy and Josefine love oysters, we had this as a starter. This was kind of exciting since neither me nor Lina like oysters. I have tried oysters a few times before and I didn’t like anything about them; the smell, the consistency, the size of them and the fact that you buy such an expensive thing to just swallow them whole, without chewing. Well, I still had to try these oysters, and they were the best I’ve eaten! I don’t know if it was just because I got used to them, or because of the lemon vinaigrette. Oysters are still not my favorite food, but I have realized that I do not dislike them as much anymore. These oysters came from France.

The main course has its inspiration in the Swedish cookbook ‘The Flying Elk: gastropub by Björn Frantzén’. They have made some changes to it; they changed the cod to halibut, and they added some savoy cabbage. This dish is a feast for the eyes, it’s very beautiful and it’s one that you normally would find served in a finer restaurant. It involves quite a few steps, but in the end it’s worth every minute; it’s that good.

The dessert comes from Josefine’s grandmother, and it was a tasty classic soft gingerbread, served with some vanilla ice cream and lingonberries. The berries adds some sourness which is good, but not necessary, so if you can’t get a hold of the berries – no worries, it tastes just as good without them.

Next time I’m going to visit Daniele in Paris, at the end of January. Daniele is 24 years old, he’s Macedonian, but born in Germany and raised in Italy, and for the past 4 years he has lived in France. He decided to move to Paris, which is 500 km away from his girlfriend, about a year ago after he got accepted to a renowned chef school. An opportunity he found to good to miss out on. I can’t wait until I get to meet him =)

The recipe (oysters with citrus vinaigrette, halibut with cabbage and soft gingerbread)

Mix together all ingredients for the vinaigrette.

Make sure all oysters are live. They are closed if they are live; if they are open you can tap them a little, and if they close up, they are safe to eat. If they do not close, discard the oyster.

Rinse off the oysters to remove any dirt or debris. Open the oysters in the way you prefer. Separate the meat from the muscle so that the meat is free in the shell.

Pour some vinaigrette over the oyster and enjoy.

Storing the oysters:
Always keep oysters with the large rounded shell-side down. If the oyster is stored on its side or on the top shell, it may lose its liquid, which is vital. Try to stack the oysters if they are in the fridge. It is highly recommended to consume the oysters as quickly as possible, they should not be stored more than 1 day after you have bought them (you can always ask your reseller how long you can store your oysters).

How to open the oyster:

1. Place the oyster in a cloth, with the rounder shell down, and the flat shell upwards. The towel will help you get a good grip as well as protect your hands in case the knife should slip. You can choose to have the hinge part of the oyster pointing towards you or away from you. Try both ways and see which one you prefer.
2. Push the knife into the opening, where the hinge is, until you feel the oyster give a little. This can be tricky, but practice makes perfect!
3. Run the knife along the edges of the shell to open it completely.

The trick to succeed with a hollandaise is that the butter and egg yolks should be around the same temperature, otherwise the sauce might curdle. According to the books, they should both have a temperature of about 60 ° C, but if you’re lazy as I am you won’t use a thermometer to check the temperature, you’ll use your senses. Check the temperature of the butter before making the egg yolk emulsion, use your fingertip. If it’s “a lot” warmer than hand hot, but you still don’t burn yourself, then you are good to go. If it’s colder than that, heat it a little more, and if it’s hotter, let it cool.

One can make a hollandaise either by making the egg emulsion in a water bath, or by making it in a heavy-bottomed pan directly on the cook plate. I’ve only made hollandaise sauce twice; the first time I tested in a water bath and the second time directly in the pan. The first time the sauce curdled, but not the second time. I’m not saying that it was because of the water bath, but it was much more difficult to use that method. Much easier do it directly in a pan, so that’s what I’ll do next!

Keep the sauce warm while preparing everything else:
Preheat a thermos by pouring boiling water in it. Make the sauce. Pour the water out of the thermos and pour in the sauce. Tighten the lid and set aside.

How to:
Melt the butter in a saucepan over medium heat. Remove from the cook plate when the butter is melted.

Remove the pan from the stove and place it on a damp cloth (that way it will remain still when whisking in the butter) and slowly add the butter while whisking. Start by pouring in very little butter, making sure that the sauce combines well, and gradually add a little more butter. Continue like this until all the butter has been added.

Season with salt, and if you’d like, more lemon juice and cayenne pepper.

How to save a curdled hollandaise:
If you’re out of luck and the hollandaise sauce curdles, then it’s easily saved by heating and whisking up another egg yolk with a little water in a saucepan. When this egg yolk has become fluffy and has thickened slightly, slowly pour the “old” sauce in the “new” sauce, in a narrow stream. Beat constantly until it blends.

Apparently, you can save it using only water as well. Watch this clip:

Halibut with different kinds of cabbage

Halibut:
Whisk the salt and water until the salt has dissolved.
Cut the halibut into portions. Brine it for 8 minutes and then remove the fish. Pat the fish with paper towels, and leave to rest in the fridge, preferably for an hour.

Cheese crisp:
Set the oven at 225 ° C (200 ° C for hot air oven).
Place baking paper on an oven tray and distribute the cheese in four equal ‘piles’ so that they are about 5 cm in diameter. Leave about 6-8 cm between the chips. Bake in oven for 5 min or until golden brown. Take out and let cool.

Brussels sprouts:
Cut off the roots of the brussels sprouts and then pick the leaves off them. Parboil in salted water for 30 seconds, remove the water and let the leaves cool. Heat the cabbage leaves in butter and lemon juice when serving.

Turnip, alternatively kohlrabi:
Boil onions, garlic, wine, water and thyme. Add the turnip / kohlrabi and cook until soft. Leave in the solution until it cools down. Remove and cut it into smaller pieces for serving.

Charred onions:
Put the salt and sugar in a cold frying pan. Place the onions with the flat cut side facing down. Slowly heat the onions and caramelize it until they are golden. Add the water and the lemon juice and allow to boil for 1 minute. Let cool and then separate the onions, leaving several petals of each onion.

Savoy cabbage:
Shred the cabbage, and fry in butter. Salt and pepper to taste, then pour the cream in. Let it simmer for a while.

Whisk eggs and sugar until white and fluffy. Stir in the butter, sour milk and lingonberry jam in the egg mix. Mix the dry ingredients and stir them into the batter. Pour the batter into a greased and breadcrumbed baking pan. Bake in the middle of the oven for 40-45 min. Let cool.

Add some sugared frozen lingonberry and serve with vanilla ice cream. Have a drink of rum with it, it’s tasty!